Will You Give These Jurors What They Want? 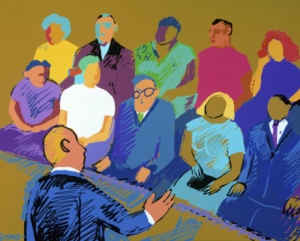 A couple of weeks ago, I sent fellow blogger and trial consultant Rich Matthews an email asking if he would comment on a post I was thinking about writing. It would be called “Avoid These Five Ways Of Alienating The Jury.” I was expecting him to provide a laundry list of “don’t dos” if you want to stay on a jury’s good side, such as wearing a bow tie,† showing up late, interrupting witnesses, etc.

Instead, Rich offered a much shorter list of ways–just two–to give the jury what they want and expect. On reflection, Rich’s list of “dos” made much more sense than my proposed list of “don’ts”. Here’s what Rich said:

“I think jurors want two and only two things from counsel, and get alienated easily when these are violated: help with understanding the material, and not wasting their time. That’s it. As obvious as that might sound, all courtroom lawyers should do a really honest reflection on their own trials and notice how many times they run afoul of either or both of these unconscious demands jurors have. That third witness you put on to say basically the same thing? Wasting jurors’ time, and they will resent you for it. That technical witness who was not understandable to them? Flunked both. A closing argument that didn’t explain [relevant rules, damages, verdict form, whatever] well enough? Didn’t help them with the material. I suggest that as counsel is planning the trial sequence, run everything through that filter; will it help jurors understand the material, and does it waste their time as THEY will judge it? Unless it’s ‘yes’ to the first AND ‘no’ to the second, leave it out. (Bonus hint: the first place to look is your witness list. Most of the time, lawyers would be better served to use fewer witnesses than they do. Wasting time in this manner just frustrates jurors if they don’t perceive each additional witness is adding new information or understanding.)”

Rich’s suggestion that what the jury wants most is help understanding the material echoes a point Professor McElhaney makes in the opening chapter of Litigation, entitled “The Guide.” He writes:

“You are the guide who knows the territory, the one who can be trusted to steer the jury straight throughout the entire trial.

Does it work? Imagine for a moment: Suddenly you find yourself in the middle of an unknown swamp. You don’t know where you are or how you got there. All you know is that somehow you  have to find your way out. You have no compass. There are no roads or trails, no signs or maps, no shadows or guiding stars. As you look around, you see two people, each saying there is only one way out. The problem is, each one is pointing in a different direction.

Which one do you follow–the one who has the suitcase with the collapsible legs, who wants to sell you one of the watches on his wrist; or the one who is pointing out landmarks and is helping you understand the terrain?” (Litigation (ABA 1995), at 4.)

Rich’s point about not offering duplicative testimony which the jurors judge as a waste of their time brings to mind this comment by another notable trial advocacy guru, Professor Thomas Mauet. In his Fundamentals of Trial Techniques, Professor Mauet points out that:

“Whom you call as witnesses to prove your case is frequently not an issue. You simply must call the witnesses you know of to establish a prima facie case, and there is no room for choices. Most of the time, however, you will have choices. . . In deciding to call certain available witnesses, remember the following considerations:

1.  Do not overprove your case. Many lawyers call far too many witnesses, thereby boring the jury or, even worse, creating the impression that the lawyer doesn’t have confidence in her own witnesses. In general, calling a primary witness and one or two corroboration witnesses on any key point is enough. It’s usually best to make your case in chief simple, fast, and then quit while ahead.” (Fundamentals of Trial Techniques (3rd Ed. 1992), at 388-89.)

I think Rich’s approach to giving the jurors what they want–rather than trying to walk on eggshells not to alienate them–is by far the better approach. Thanks, Rich!

I am an AV-Preeminent rated trial lawyer. My practice focuses on helping companies throughout Southern California resolve employment and business disputes. The words in this blog are mine alone, and do not reflect the views of the Dykema law firm or its clients. Also, these words are not intended to constitute legal advice, and reading or commenting on this blog does not create attorney-client relationship. Reach me at acraigie@dykema.com. END_OF_DOCUMENT_TOKEN_TO_BE_REPLACED
This entry was posted on Monday, December 30th, 2013 at 6:00 am and tagged with Evidence, jurors, jury, Mauet, McElhaney, testimony, Witness and posted in Evidence, The Craft of Lawyering, Trial. You can follow any responses to this entry through the RSS 2.0 feed.
« When All You Hear Is “No”
It’s Resolution Time At Counsel Table »

One response to “Will You Give These Jurors What They Want?”