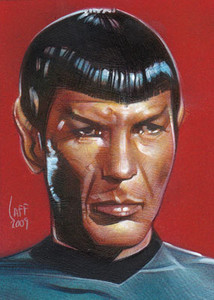 The media, film, and TV have long fueled a belief that the most important quality any lawyer can possess is the ability to conduct a withering cross-examination of a pivotal witness. As practitioners, we know better. The ability to think, argue and write clearly and persuasively is vastly more useful to the careers of most lawyers, at least in the real world.

One quality that does not receive much attention, but that is unquestionably something our clients pay for and (should) expect, is the ability of lawyers to approach, apprise and navigate through any situation using logical, intelligent analysis, with a minimum of ego or emotion.

I recently came across an article, in the May, 2013 issue of For the Defense magazine, in which a seasoned Georgia mediator, Christopher Ziegler, suggests, in the context of mediation negotiations, that we emulate Mr. Spock from an obscure and little known TV show called Star Trek.

I’ll confess up front that I never watched much Star Trek. This isn’t to suggest that I was doing anything better with my time. I wasn’t, unless Wild Wild West or Gumby could somehow be considered higher quality programming.

My point is that I never really paid much attention to the show or to Mr. Spock’s qualities. But in reading Mr. Ziegler’s article, “Two Emotion-Based Enemies Of The Good Deal,” I’m convinced he is onto something. Ziegler writes that attorneys and their clients mediating cases “should never act out of emotion . . . [but should adhere to a] plan, which is presumably based on analysis, logic, and reason.” Id. at 37.

Ziegler suggests that Mr. Spock, being half human and half Vulcan, “was extremely intelligent, pragmatic, and well-reasoned, never allowing his emotions to foil the best and most ‘logical’ decisions.” Id. at 38.

I cannot think that Ziegler is suggesting we should be Vulcans who are altogether devoid of emotion. After all, compassion and empathy are vitally important traits for any professional. We are not machines or computers. Rather, his point is that, when participating in a mediation, our clients should be able to look to us to advocate and negotiate in a cool, objective, non-emotional way. Discussing Spock, Ziegler writes:

“Whenever a tough decision had to be made, Spock’s decision, or his advice, was always based on the most logical, intelligent analysis, not on ego or emotion. Thus, if the most logical, best way to save the entire crew from some dilemma meant that Spock had to die, Spock would announce without emotion or drama that the necessary decision would be the course of action that would result in his death. Spock had no ego, felt no anger, and shed no tears. With an analysis free from emotion, Spock could matter of factly make a cool-headed, rational decision even if emotion would have frozen others.” Id.

While Mr. Ziegler writes about striving to quell ego and emotion during mediation, I would argue that the best lawyers are those who try to maximize cool, logical analysis and minimize ego and emotion in every aspect of their practice, not just during mediation. Certainly, a Spock-like lawyer does not storm out of a mediation early just because his opponent is not making rapid or satisfactory movement (Ziegler’s point). But he also refrains from ego-driven, ad hominem attacks during depositions or in law and motion papers. He does not allow his ego to escalate a conflict where his client’s interests are better served by seeking a compromise or otherwise de-escalating the conflict. The point is that the best lawyers are not just monkey-scribes, ghost writers or hired guns. The best lawyers bring sanity to situations that can otherwise be less than sane.

And I expect some of the very best lawyers may also have pointed ears.