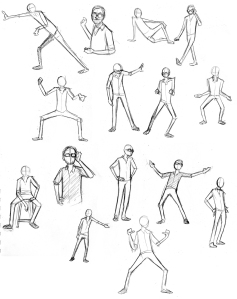 “Some people cling to an old-fashioned, post-Victorian belief that gestures are inappropriate for public speaking. Law students and attorneys are often told to place their hands on the lectern or at their sides, because gestures distract the listener.” This observation comes from Brian Johnson and Marsha Hunter, in their recent book, The Articulate Attorney: Public Speaking for Lawyers (at p. 25).

I know I’ve received conflicting advice on this topic. And I’ve been on the receiving end of speeches in which the speaker gestured so freely and wildly that it was distracting and he came across like a crackpot. On the other hand, a speaker who remains so unnaturally still and wooden appears to lack both passion and conviction and, in most instances, will utterly fail to engage the audience.

Assuming you want to engage your audience, whether it is a jury deciding your client’s case, a panel of appellate justices, or a room full of potential clients, it’s a good idea, then, to make an earnest effort to not only use gestures, but to use them effectively. Lucky for us, Johnson and Hunter’s new book offers some valuable guidance in a section entitled “What Do You Do With Your Hands?”

First, they point out that “[g]esturing is not emotional or theatrical, but logical.” Id. at 27. “Gestures suit, or fit, the words being spoken, and the words logically fit the actions of our hands.”  Id. To achieve this logic, they advocate careful formulation of the first sentence of your speech. Even if you improvise much of the rest, it is a good idea to choose and practice the words with which you will begin, then practice fitting gestures to these words until you settle upon those that are most suitable. This allows you to “jump-start” the style of gesturing you will employ for the balance of the speech. As Johnson and Hunter write:

“At the very beginning of a presentation, the instinct to gesture can be as dead as a car battery at twenty below zero, frozen by self-consciousness, anxiety, or the erroneous belief that gestures are distracting. To jump-start your gestures, think of your brain as the energy source. Connect the metaphorical jumper cables of conscious thought to your instinct to gesture and turn the key. Deliberately gesture at the beginning, and suit the action to the word. Make sure your gesture engine is running.” Id. at 28.

Johnson and Hunter also advocate a style of gesturing that uses large gestures, involving the entire arm, which “move or flow through an area in front of the body called the ‘zone of gesture.’ This zone is a large space approximately two feet tall by four feet wide. It extends vertically from the waist to the nose.” Id. at 29. These larger, whole limb, gestures “avoid a common pitfall of nervous speakers: gestures with just wrists or forearms.” Id. at 31.

Finally, they address the question of what to do with your hands when you are not gesturing. Rather than the awkward crotch-blocking “fig leaf” position, in which the arms are fully extended, or the frigid, white-knuckled gripping of the lectern, Johnson and Hunter suggest we use what they call the “ready position.” Hands are “loosely touching at waist height. Hands and forearms are energized and ready to go, not pressed against the abdomen. The position is loose, not tight. A little bit of space separates the forearms from the abdomen.” Id. at 33. A principal advantage of this “ready position” is that, when you are not actively and intentionally gesturing, your hands become “invisible to most observers.” Id. at 35.

If none of this sounds particularly revolutionary, that’s probably because it’s not. As noted by Johnson and Hunter, that marginally famous writer Bill Shakespeare, speaking through the title character in Hamlet, instructed the players to “Suit the action to the word, the word to the action.” Id. at 27. Makes sense, doesn’t it?

I am an AV-Preeminent rated trial lawyer. My practice focuses on helping companies throughout Southern California resolve employment and business disputes. The words in this blog are mine alone, and do not reflect the views of the Dykema law firm or its clients. Also, these words are not intended to constitute legal advice, and reading or commenting on this blog does not create attorney-client relationship. Reach me at acraigie@dykema.com. END_OF_DOCUMENT_TOKEN_TO_BE_REPLACED
This entry was posted on Monday, June 17th, 2013 at 6:00 am and tagged with attorney, Brian Johnson, gestures, Lawyer, Marsha Hunter, speech, The Articulate Attorney and posted in Oratory, The Craft of Lawyering, Trial. You can follow any responses to this entry through the RSS 2.0 feed.
« Which Of Us Will Go The Distance?
Three Ways To Control An Evasive Witness On Cross-Examination »